Have you guys seen that Marston’s Pubs have introduced an exciting new no meat menu featuring super inventive menu items such as jackfruit wedges, the Moving Mountains B12 Burger and a raspberry jam donut pudding?! I’m not ashamed to admit that Matt and I headed to our local Marston’s on the first day the menu launched as Matt was extremely excited to try the ‘bleeding’ B12 burger! 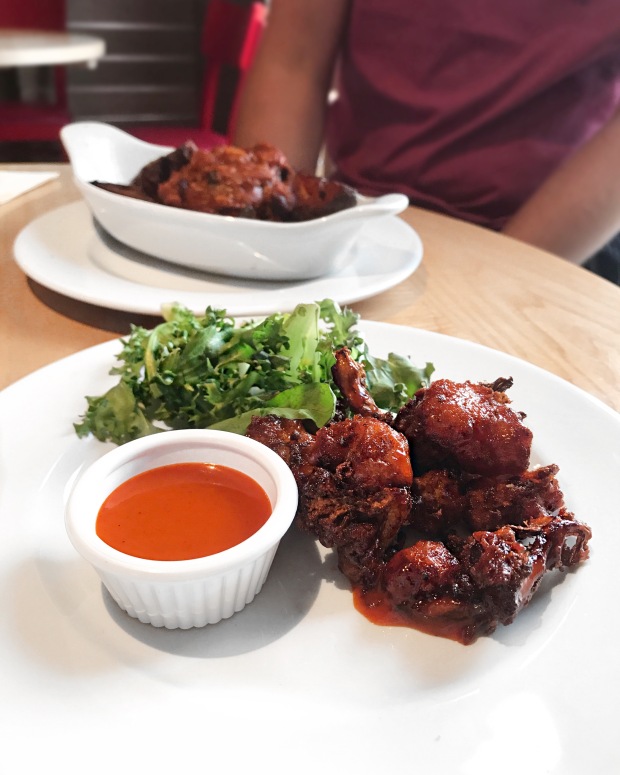 For main, Matt of course ordered the B12 burger and I went for the mushroom pie. We usually share dishes so that we get to try more of a menu, but as a pretty much life long veggie, the realisticness of the burger kinda freaked me out so I couldn’t bring myself to try it! Matt on the other hand was a huge fan! He said it was very realistic and had a great flavour and texture; so for anyone who likes the taste of traditional burgers but also loves animals, then this is the burger for you!

Although we were full after our delicious starters and mains, we knew we had to make room for dessert as the menu had such original, exciting options! Matt ordered the raspberry jam donut pudding and I went for the rhubarb and ginger pudding which was absolutely heavenly. The sponge was so light and fluffy and the rhubarb and ginger flavour combination was delicious.

There’s still lots of menu items we’re excited to try, like the Tikka Masala and the Buffalo Cauliflower Tacos, so I’m sure we’ll be back very soon and I’ll be sure to update this post with the details. And of course, if any of you guys have been to a Marston’s to try their new vegan menu – I’d love to hear what you tried and what you thought!

I’m a vegan blogger and animal advocate. I created Jade Green Vegan to inspire others to live the healthiest, happiest and kindest life possible ♥