Ever since I was little, my mum and I have celebrated Halloween in a big, and I mean big way. We threw a Halloween party every year and always had the spookiest house on the street, covered in cobwebs, glow in the dark stickers, zombie figures; you name it, we had it. As I’ve grown up and moved away to university, my insane excitement for halloween definitely isn’t something I’ve grown out of, if anything it has intensified! So this Halloween, I decided to combine my newfound love of creating yummy vegan recipes with my insane long-time loving of all things Halloween to create these Vegan Halloween Cupcakes. 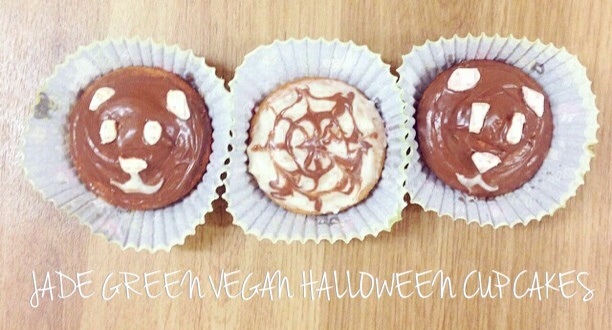 As you can see from the above picture, my friends and I had a major pumpkin carving session today which was so much fun and also meant that we had a lot of pumpkin innards to spare. I of course took this opportunity to create more pumpkin recipes, so later this week I’ll be sharing the recipe for the JGV Halloween Pumpkin Smoothie which very excitingly is going to be shared on the Exeter University Veggie Society Blog!